With rain recorded on fifteen days since August 1st at ADAS Boxworth in Cambridgeshire growers are being advised to look out for Phoma in OSR crops. That’s the warning from ADAS plant pathologist Dr Faye Ritchie.

Many areas have experienced a wet end to summer and there is a real possibility that thresholds could be reached a little earlier this season. “The trigger for air-borne spore release is twenty rain days from August 1st. We only need a few more rain events and we’ll be there.”

And with some growers delaying drilling to counter CSFB it could heighten the risk further. “The smaller the plant the easier it is for the disease to spread from leaf to petiole and then stems. If these crops haven’t achieved sufficient growth by the time we see Phoma leaf spot they could be extremely vulnerable,” she cautions. 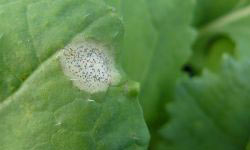 But the threat isn’t just Phoma, Light Leaf Spot (LLS) could also threaten too. “LLS was again very evident last season – the DEFRA oilseed rape disease survey data shows 85% of crops were affected in England and Wales with 34% plants showing symptoms in affected crops last spring. Stubbles from the previous year’s crop act as a reservoir and this wet spell will have done little to check production of air-borne spores.”

With both Phoma and LLS to consider it is one reason why Dr Ritchie favours split autumn foliar treatments. “A first application when 10 to 20% plants are affected by Phoma leaf spot and a second application approximately four to six weeks following a first treatment, assuming thresholds are reached, should be considered,” she notes.

For Bayer CropScience technical manager Tim Nicholson he too is worried about the vulnerability of late drilled crops. He points out that at the start of the month 40% of the wheat crop was still to be harvested in many areas. “Although some OSR has gone into the ground the weather has intervened and combines have been stuck in the shed. With growers forced into drilling later large parts of the OSR area could be at high risk to Phoma.”

And he also has concerns with LLS. “With black-grass driving rotational strategies for many growers, some will not want to

plough up non-dormant seed. The result is that there could be plenty of trash around driving ascospore production. If it stays wet leaf wetness is then all-important for germination of ascospores and subsequently secondary infection via conidia, so both diseases could threaten this autumn,” he suggests.

For him it reinforces the arguments for split applications. “If Phoma thresholds are reached early then there is a good chance you will have to get back in anyway. The second spray is the opportunity to hit LLS too.”

But even with the possibility of earlier infection he says growers don’t need to move away from current split spray recommendations. “Earlier applications could leave new growth exposed to LLS if the second spray isn’t effective against the disease. It’s why we advise a 0.32 L/ha dose of Proline275 (prothioconazole) at the first treatment followed by a 0.46 L/ha dose for the second. The gap to pre-stem extension can be several weeks and you really do need the potency of a robust dose of an effective active,” he concludes.