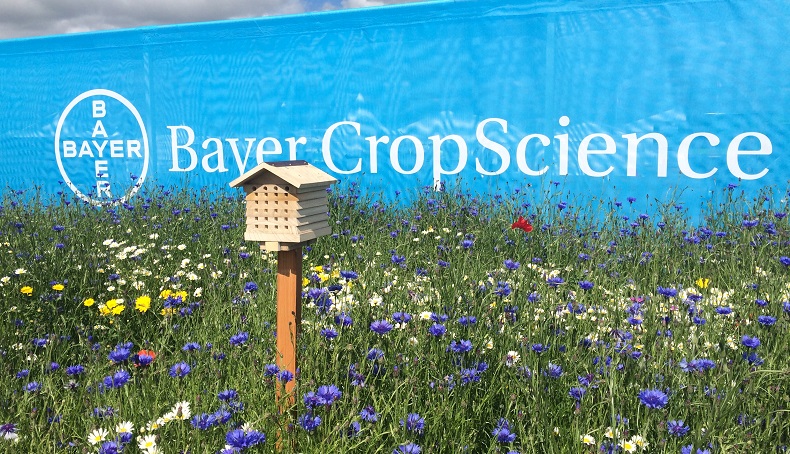 Just over two years ago, I attended the Friends of the Earth bee “summit” in London where a number of invited guests gathered to discuss how to “save the honey bee.” The European Commission had recently announced that 2014 would see the introduction of the ban on the use of three neonicotinoids on “bee-attractive crops.” For a number of activists there, they felt that the decision had dealt a major economic blow to the pesticide industry; I pointed out that the impact on the companies in the UK was not very significant, but that farmers would suffer economic damage if alternative sprays failed to hold back the insect pests, and pollinators would suffer two-fold; firstly, that spray applications of insecticide were more likely to affect “non-target” insects than seed treatments, and secondly, that there would be less oilseed rape planted, and fewer oilseed rape plants surviving to flower, meaning less pollen and nectar for insects at a critical part of the season…

For the UK, the first impacts of the ban were felt last autumn as farmers faced the prospect of growing oilseed rape with unprotected seed. As predicted, less oilseed rape was planted.  For many farmers, it was the first time in a generation that they had planted untreated seed and it was not a pleasant experience, especially if they were farming in the East of England, where many fields were completely destroyed by successive waves of cabbage stem flea beetles; for others with a lower pest pressure, good control of insect damage with multiple applications of broad spectrum insecticides meant good yields, and they may have wondered what all the fuss was about.

But that is the point of seed treatments, is it not? They reduce the need to spray. Which means that during one of the busiest times in the farming calendar, and often during some of the wettest months, a farmer does not have to worry about getting on the land to spray. The recent desk study published in Nature Scientific Reports by FERA was widely reported in the media as showing a link between neonicotinoid seed use and bee losses; actually it was a two pronged report which also suggested that “farmers who use neonicotinoid seed coatings reduce the number of subsequent applications of foliar insecticide sprays and may derive an economic return”; this must come as a relief to farmers who have been using these seed treatments for over 20 years!!

The proposed correlation between seed treatment and bee losses is worthy of further research, especially since it is at odds with other recent studies which showed no such impact on honey bees under properly controlled testing in worst case scenarios. As the authors say, the biggest determinant and correlation with bee health studied was with the region in which the bees were present, with Wales, a region of the UK with historically low neonicotinoid use, having consistently high bee colony losses. Also, the control, or lack thereof, of the Varroa mite, the single biggest threat to UK bee health according to beekeepers and bee scientists up and down the country, was not even included in this desk study. Most importantly, there are now more honey bee colonies in the UK than there were when the seed treatments were introduced, with fewer wildlife incidents involving bees and pesticides, and honey bee colony losses have actually been at a low level during the last few years despite increasing amounts of seed treatments used.

Prior to the ban, the European Commission instigated a survey of beekeepers who had experienced losses of bee colonies, and a parallel survey of laboratories who had investigated colony losses. Both came back with the strong message that the lack of control of the Varroa mite, together with the viral diseases that it spreads among bee populations was, by far, the biggest determinant in those colony losses. The impact of pesticides was trivial in comparison.

So why would the Commission translate that message into a need to focus all of their attention on denying farmers access to three seed treatments which did not appear to be having a significant impact on bee losses? The answer perhaps comes from a certain Dr Michael Flüh. As Head of Chemicals Unit in the EU Health and Consumers Directorate-General at the European Commission in 2014, he said that “The recent suspension of certain uses of neonicotinoid insecticides was not imposed because they are the main threat to bee health but because they were the only factor that could be quickly regulated by the European Commission.” Seemingly not considered newsworthy from media outlets, it is a fascinating insight into European Commission policy which considers doing something as being more important than doing the right thing. A bit like a farmer deciding to control wild oats because controlling the really problem weed in wheat, namely blackgrass, looks too difficult a task to take on.

And so to the furore surrounding the emergency use approval for two neonicotinoids in an extremely limited area of the east of England. The derogation arrived at the very last minute with many strings attached; combine that with the almost homeopathic amounts of Bayer’s Modesto and Syngenta’s Cruiser allowed meant that some very difficult decisions had to be made. In the end, the products will be able to protect perhaps a third of the oilseed rape crop in four counties – namely Bedfordshire, Hertfordshire, Cambridgeshire and Suffolk. Many other farmers will inevitably miss out. In the end the area allowed under the derogation makes no sense either economically or agronomically. But convincing the Government that such a derogation was needed is a political success and one that can be built upon in subsequent years.

New studies are on their way looking at the impact of both Modesto and Cruiser on honey bees, bumble bees and at least one solitary bee in three countries across Europe. Real bees in real field situations. When these results come out, at least the Commission and the UK Government will have the facts, and if, as many people believe, they show no significant impact, will the Commission reverse the decision across Europe? If not, the UK Government will have every reason to allow farmers to access neonicotinoid seed treatments wherever they need them.