I read a recent excellent blog from Matt Ridley (also published in The Times) on how science and innovation has kept harvests of our staple foods just about in line with consumption. In the case of cereals, that involved breaking a new global record last year at 2.54 billion tonnes — an astonishing 20% higher than 10 years ago. He finished by reminding us that the science writer “Nigel Calder once wrote that a Martian would conclude that the masters of planet Earth are three species of grass — rice, wheat and maize — which have somehow persuaded huge numbers of apes to toil day and night to clear forests, irrigate deserts and kill weeds on their behalf.”

It is an interesting vision of evolution in which you sacrifice the majority of your fellow beings to feed the apes in order for a tiny percentage of your species to survive into the next generation. And, although I cannot see it catching on, we do spend a lot of our time sorting out the problems that plants get themselves into, or problems that we get them into.

Citrus greening, for example is a disease that is causing huge problems for orange producers, both in North America and South-East Asia (where it is called Yellow Dragon disease). Spread by Asian citrus pysllid, the virus causes twig dieback, poor flowering and stunted growth, and the fruit from diseased trees is small, misshapen and bitter in taste. Currently the only way of dealing with the disease is to control the insect vector but there is some hope of a GM solution using a gene from spinach. In the meantime, it is good to see Bayer CropScience supporting a year long campaign (www.citrusmatters.us) to raise consumer awareness of Huanglongbing (HLB), citrus greening disease, and the devastating impact it could pose to California's $2.4 billion citrus industry.

At the same time that Jonathan Jones et al at the Sainsbury Laboratory in Norfolk are producing potatoes that can withstand high levels of fungi responsible for blight, he and others have also been looking at what we do with potatoes once we have bought them. The act of frying potatoes does result in accumuulation of acrylamide, a chemical associated with a number of health issues. In this particular case, the U.S. Department of Agriculture has recently approved commercial planting of a potato developed by Simplot, that is genetically modified to resist bruising and to produce less acrylamide. Interestingly, research from Iowa State University found that US consumers were willing to spend more for such a healthier genetically modified potato.

Talking of bruising, the USDA has been active of late – both it, and its Canadian equivalent have just authorised the growing of different varieties of apple that don’t go brown once you have cut them. The so-called Arctic apples produced by Okanagan, look to have a great future in the prepared fruit market and could seriously reduce wastage in this area. 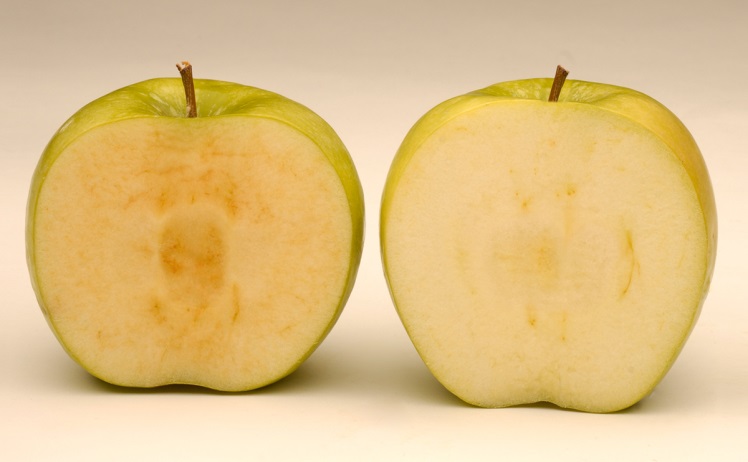 When I moved over to science communication, I was told by members of the green lobby that consumers would not accept GM crops because they offer nothing to the consumer. No doubt they will move the goal posts and find other reasons to object to a technology that might save orange juice in the US, a healthier potato, or keeping our fruit fresher.