Maize growers will benefit from improved control of key weeds and more flexible rotations, following the launch of a herbicide containing an active substance new to the UK market.

“We are bringing two new active substances to the maize market,” says Tim Holt, product manager at Bayer CropScience. “Many growers will already be familiar with iodosulfuron, a mainstay of our cereal herbicide portfolio.

“But foramsulfuron is completely new to UK growers, and in conjunction with iodosulfuron delivers the highest control across the widest spectrum of weeds in maize. The other ingredient is our safener isoxadifen, which ensures its crop safety is equal to, or better than, its competitor products,” says Mr Holt.

“On top of its grass weed control, MaisTer WG boasts good broad-leaved action - fat-hen, black-nightshade, seedling docks and crane’s-bill being amongst its strengths.”

Its ability to control crane’s-bill caught the eye of the MGA’s independent agronomist  Simon Draper, who has been conducting trials on the product.

“Other herbicides offer around 40% control of crane’s-bill but MaisTer WG regularly achieved 90%,” he says.

“Applied at the 2-3 leaf stage of the crop, MaisTer WG offers great all-round weed control and its ability to control black-grass control is likely to prove useful for growers trying to tackle increasing populations of this difficult weed,”

MaisTer WG has no restrictions on crops grown in the year following application. As maize spreads eastwards, and into the arable rotation, the lack of follow-crop restrictions means all vegetable and root crops can be be grown in the spring after maize, unlike the restrictions facing alternative maize herbicides.

Growers who use MaisTer WG this spring should remember that it must be applied with the adjuvant Mero in no less than 200L of water, and only once maize has reached the two leaf stage.

“It does take a little time for weeds to look sick,” says Mr Draper. “But this doesn’t really matter.  The important part is that MaisTer WG stops weeds growing - and competing with crops - very soon after application.”

Bayer expects MaisTer WG’s wide weed spectrum to be the most appealing feature amongst those growing maize for livestock, while the increased flexibility for following crops will make the product attractive to arable growers who’ve brought maize into their rotations as an energy crop. 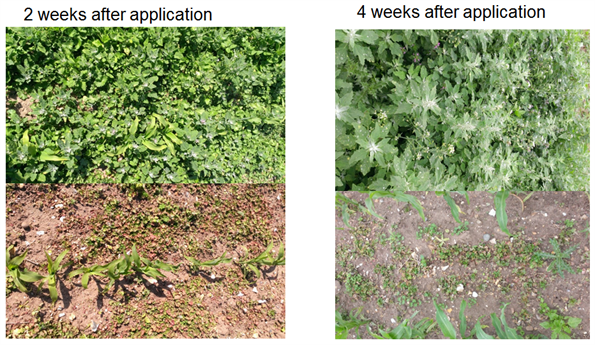