Social media is a composite made from two words “social” ie, it is a way to informally communicate, and “media” which for the purposes of this context is supposedly meaning “information or news providing”. What is really clear, whether we are talking Facebook, Twitter, blogs, forums, Flickr, YouTube, is that social media has moved on from just being “social”. Today, many companies have a Twitter feed, and many a Facebook account, in support of their official web pages, and the marketing opportunities and advertising on such sites seems to be growing exponentially. Specialist social media sites are even being brought on stream to cater for businesses and people who feel Facebook is “too social” – LinkedIn is a good example of this.

This month, the Bayer CropScience UK Twitter feed @Bayer4CropsUK received its 3000 follower – indeed, at the time of writing, we have 3051 followers. Earlier in the existence of our account, we looked at who was following us. As you can see from the chart below, we were surprised in some ways that nearly half our followers were exactly those people we were hoping would be interested in what we were saying – ie, farmers, agronomists, distributors, academics and journalists. Assuming that figure remains constant, that means there are upwards of 1500 of our target audience following our twitter account; and if you include people and business associated with our target audience, the figure rises to 70% or over 2000 of our followers. 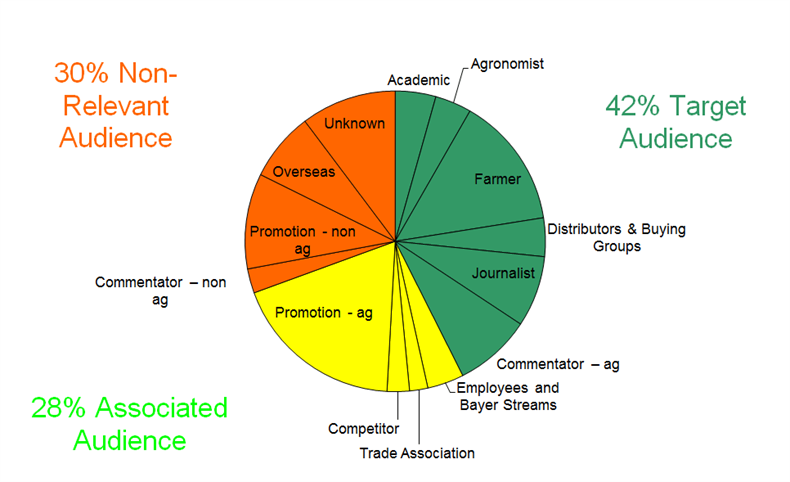 My point here is that whilst of course, Twitter can be and often is a social mechanism for sharing information, it is certainly also an alternative business information outlet, and one that will undoubtedly increase in the future. We know that journalists, politicians and non-government organisations are actively monitoring social media outlets for both stories and information, and we use it ourselves to actively promote our activities in the area of stewardship, products and services as well as talking about things that we see in the “normal” media that we think our followers might be interested in.

The Twitter feeds remain an area that we have a lot of interest. There is a feed for the company as a whole Bayer4Crops, and just adding the two letter country abbreviation will take you to the feed specific for that country – such as @Bayer4CropsAU or @Bayer4CropsUS for Australia and the United States, respectively; in addition, Bayer Animal Health can be found at @Bayer4Animals, and our interest in bee health is reflected in @BayerBeeCare.

In the UK, Bayer CropScience has yet to venture into Facebook, although our colleagues in Bayer Garden have been using it; not surprisingly their proximity to their end customers make social media outlets such as Facebook an idea way of communicating. We do participate in Farmer Forums of course as appropriate, and this blog demonstrates that we are always interested in identifying new ways of communicating with our customers and interested parties.

We of course retain our website as the go-to place to find out more about our products and Ian Cockram at Bayer Assist remains a key contact for those of you who need assistance in their use.

And finally a thought. “Nobody believes what they read in a newspaper” is something invariably people subscribe to in theory but not in reality; indeed we are quite happy to re-tell a story that we “read somewhere”. Social media is an excellent method of getting one’s thought processes to lots of people, a bit like writing a message ten foot tall on a building next to a railway line; it is entirely possible that the accuracy of something you read on Twitter is of a similar quality….