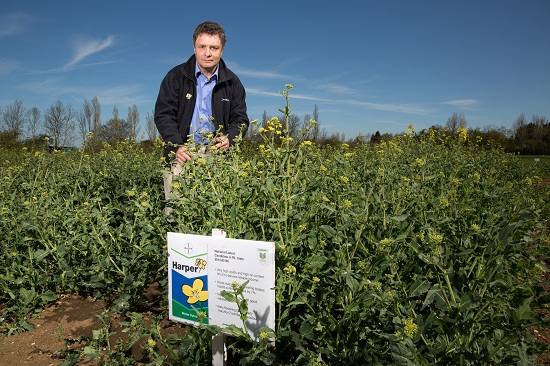 Just six months from the launch of its UK seeds business, Bayer has chalked up a milestone achievement; three new high-performing hybrid OSR varieties on the HGCA 2014/15 lists.

Harper is now on the HGCA winter OSR 2014/15 East/West region Recommended List (RL), Fencer is a new winter East/West RL candidate and Dodger is new to the spring Descriptive List.

Harper, the company’s first winter hybrid for the UK, is listed with a gross output of 103% and a stem canker resistance rating of 9, making it the highest performing phoma resistant variety. It is relatively early maturing and has above average oil content listed at 45.1%.

Although not on the North list, Mr Cottey says the company’s trials there, including a standard regional fungicide programme to protect against light leaf spot, have shown it to be equally well suited to the North – due to its hardy, vigorous nature – and describes Harper as a nationwide variety.

“Fencer is slightly later maturing than Harper, offers excellent standing power and in trials so far has shown the potential for a further 2% gross output with comparable oil bonus potential.”

The three varieties are expected to be commercially available for the 2014/15 season, with Harper fully available, and Fencer and Dodger in small quantities. Mr Cottey encourages growers choosing them to also make use of Bayer’s nationwide agronomy support. “While bringing class-leading stem canker resistance we want to help growers integrate this with fungicide use to ease management decisions and maximise returns.”