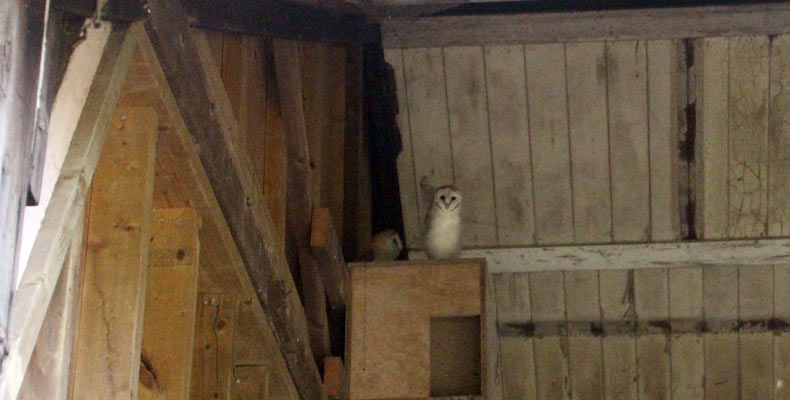 In October we had a local hawk and owl expert visit both farms. The main purpose was to ring any young barn owls that were still in the nest box at Chishill, although it would have been better done a couple of weeks earlier.

Over the week before, the fledging owls were starting to leave the confines of the box and so the chances of finding them all at home were decreasing with each day. When the box was opened the desire for the young to leave home was confirmed, but it wasn’t all bad as one of the brood was still inside: they are much keener to leave than human off spring!

The opening of the box, handling of the owlet and ringing was all done by an expert with the knowledge of how to handle chicks and with a Schedule 1 part 1 authorisation. It was fascinating to see how relaxed the young owl was when handled correctly and during ringing, as you can see in the picture. 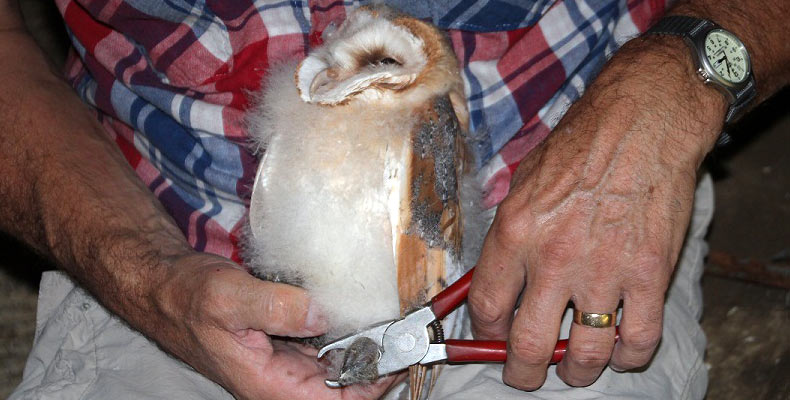 In total I have seen three young owls in the barn this year, which counters the lack of breeding success in the local vicinity. 2013 has generally been a very difficult breeding year for barn owls with many not rearing any young at all.

Having ringed and taken feather measurements from our youngster it will be possible to age to the day and sex the young bird. It will be interesting to see where it reappears, if it can survive the winter.

Despite the 2012 and 2013 seasons being difficult the owls at Chishill have been successful in both. Last year four young were seen around the barn, but these were only viewed from afar and not ringed. I take confidence that we must be doing several things right to have four and then three owls fledging over the last couple of difficult seasons.

For next year we will modify the opening on the box. A barn owl can get through an opening about the size of a tennis ball, wide enough to get its shoulders through, and so we will reduce the size of the opening to make the box more enclosed for the next youngsters. This will stop any pushing and shoving from the back when Mum or Dad return with another snack forcing the owlet at the front out of the box before it is truly ready to leave.