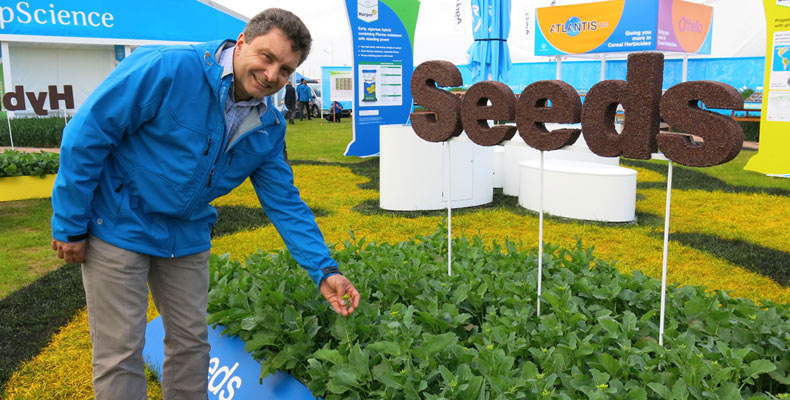 But the benefits would be of greatest value to growers who took steps to tackle a perhaps hidden problem on farm – volunteer oilseed rape, Adrian Cottey, the firm’s seeds campaign manager said at Cereals 2013.

As well as producing hybrid varieties well suited to the UK grower, and providing the best agronomic advice on how to grow them successfully, Bayer would use its expertise to ensure seed quality was of the highest standard to help maximise the performance of the varieties, he explained.

“Quality seed delivers uniformity for growers, which aids performance and management. In the longer term, as we produce step changes in yield performance and bring new traits to market, it will also be crucial for delivering those enhancements to growers.”

The firm had nearly 20 years’ experience of breeding hybrid oilseed rape seed and recognised that the seed production process was more challenging than that for open pollinated varieties, he said.

“Our team sees this as a near pharmaceutical process, as the requirement to eliminate all other sources of pollen and to maintain the separation of seed at and after harvest is total.”

The first step in the process is to use separate locations in Belgium, where oilseed rape is not commercially grown in large quantities, for the production of male and female lines using completely separate drilling and harvesting equipment and separate stores.

Similarly there is a desire to find new areas in the EU and beyond to produce commercial seed free from the dangers of outside pollination brought by volunteers and nearby oilseed rape fields, while still gaining the benefits from a favourable climate.

“There are no shortcuts with this, so we are prepared to use remote regions, utilise farms with irrigation or even use Southern Hemisphere countries that do not grow much oilseed rape – it will be worth it to achieve the genetic purity we want in our hybrid oilseed rape seed,” said Mr Cottey.

A basic seed purity of over 99% was required to have any chance of meeting commercial hybrid certification purity standards of over 90%, he explained. “Then various specific quality control tests are performed in specialised laboratories before we pass the seed to the certification authorities to make sure the grower is buying the highest quality hybrid seeds.”

But all of this effort can be partially wasted if significant quantities of volunteer oilseed rape are growing in the planted field, he noted.

“Around 5% of shed seed can survive through a three or four-year rotation, which could be as many as 250 seeds / sq m. Typically growers are trying to establish just 40-50 plants / sq m of the sown variety,” he said.

“Experience in trials suggests that maybe 10-20 volunteers are establishing, which could be reducing yields by 3-5% and oil content by 1-2%, as well as making the crop harder to manage. And as new traits and potential step changes in performance are gained it will be critical to grow crops in an environment as free from volunteers as possible.”

To understand the extent of the problem, Bayer was undertaking a survey of 100 growers on the stand at Cereals 2013 to gauge the level of volunteers growers felt their crops suffered from, he said.

“We also intend to use our agronomic expertise alongside independent advice to prepare the guidelines for growers to both limit further seed shed, and to reduce the seed banks in the soil.”

Future technological developments would also help growers achieve better volunteer control, he added. “For example, herbicide tolerance is an opportunity to reduce the current seed bank, while genetic anti-pod shatter and pod loss traits could reduce the amount of seed being returned to the soil. Both of these are in our sights as future traits in Bayer seeds.”