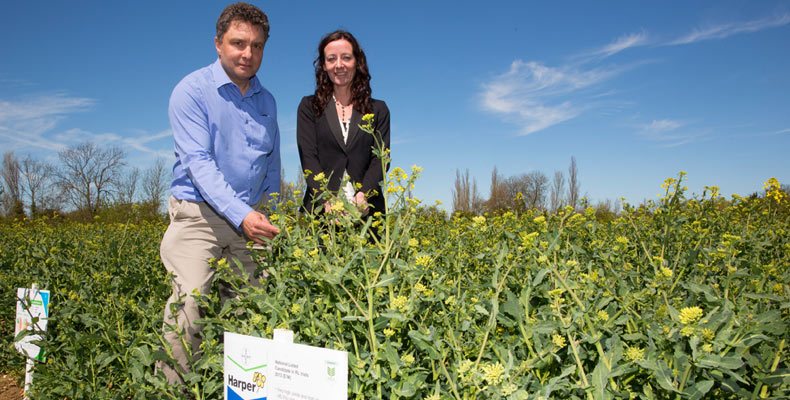 Making a step change in the yield performance of hybrid oilseed rape varieties is a key aim for Bayer CropScience as it enters the UK market as a breeder.

Already the global leader in hybrid oilseed rape seed after producing consistently successful high-yielding hybrids for the North American market, the expansion into the UK and Europe markets marks the firm’s further investment into seeds, to build on that and other breeding successes.

“There is a clear objective to extend our seeds business in six core crops around the world, including wheat and oilseed rape,” Frederic Arboucalot, head of seeds business operations in Europe, says.

To achieve that 30% of the current seeds sales turnover of nearly €1bn (£850m) is being reinvested into further research and development, with the aim of spending as much on seeds research as crop protection by 2015.

One of the keys for success in oilseed rape will be to improve the yield performance of hybrid varieties, and their hardiness to adverse conditions, Mr Arboucalot says. “We have already shown that our breeders can do that in North America, where our InVigor hybrids out-yield the competition by 6%. The same team has already started working on bringing that success to Europe.”

The lead breeder in that team, Dirk Decherf, says access to different sources of breeding material is a crucial starting point. “We have carefully characterised our germplasm and used the latest breeding technology to create genetically diverse pools of parental breeding lines.”

After carefully assessing parent lines for agronomic characteristics, such as autumn and spring vigour, stem stiffness, earliness of maturity and disease resistance, experimental hybrids are produced from male and female lines from very different genetic backgrounds to maximise their hybrid potential, he explains.

In the UK that process has led to an initial portfolio of varieties with key characteristics of high yield and oil contents of over 45%, excellent stem stiffness and standing power, and good early season vigour, says Carol Norris, development manager in the UK.

“It is a combination that will allow growers to maximise profits through yield and oil bonus payments from varieties that establish well and are easily managed,” she says.

The first Bayer CropScience hybrid variety, Harper, is already in HGCA Recommended List trials, along with two conventional open-pollinated varieties, Patron and Fletcher, which have also come through the breeding process.

“Harper and Patron will be available for commercial plantings from this autumn. Harper is suited to the whole of the UK and is the only hybrid that offers both high gross output and excellent stem canker resistance, while Patron’s exceptionally high oil content is already attracting a lot of interest from growers.”

These key characteristics are also present in varieties further down the Bayer CropScience pipeline, Adrian Cottey, seeds business manager for the UK, says. “But as we continue our breeding development we expect to bring further improvements to our hybrid varieties, not just in yields, but also, eventually, in adding other desirable traits for growers and end users.”

The company is also investing considerable resource in making sure that growers have access to the best information on how to grow the new varieties right from the first season.

“The performance of oilseed rape on farm is critical to the profitability of many farm businesses, so we want to make sure growers don’t just buy the right varieties for their farm, but that they get the expected performance level from them too.”