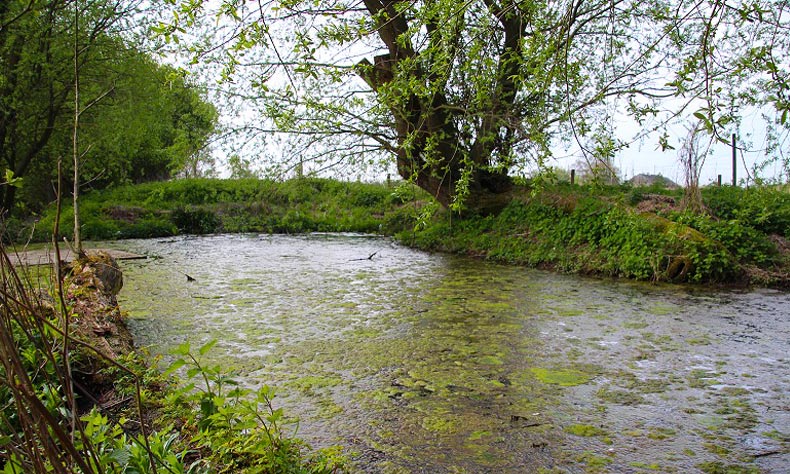 I was discussing the Chishill ponds with our farm manager last week as having removed one problem weed from the surface, the upper pond was again covered but this time in algae. Andy commented that “nature will always fill a vacuum” and this appeared a perfect example of this. The result is me back with the rake hooking out the sickly green blanket. Compared to the original weed problem this was an easy job assisted by the strong winds blowing the algae to one side; a result for once. By removing the algae it will let more light into the water which will help avoid oxygen depletion by allowing the current underwater plants to release oxygen, but later into the year when the algae would have died and sank to the bottom the breakdown would have created a large biological oxygen deficit (BOD).

With the algae under control in the Shelford pond following the dunking of some bales of barley straw, we will do the same for both ponds at Chishill.

In the clearing of the algae I noticed what will probably become the next problem: Duckweed. This has been naturally introduced, probably on the bills, feet and feathers of ducks. It is another example of a surface plant with the potential to dominate the vacuum on the surface and so will need careful monitoring. Around the edges the pond has a number of willow trees which result in a considerable leaf fall into the water through the autumn. With the breakdown of these leaves the fertility of the pond is increased assisting these aggressive plants in their quest for what they do; dominate. Over recent years we have been pollarding the trees, but I think this winter will be the time to finish the job. This will reduce leaf fall and hopefully start to turn the balance back in favour of the indigenous flora.