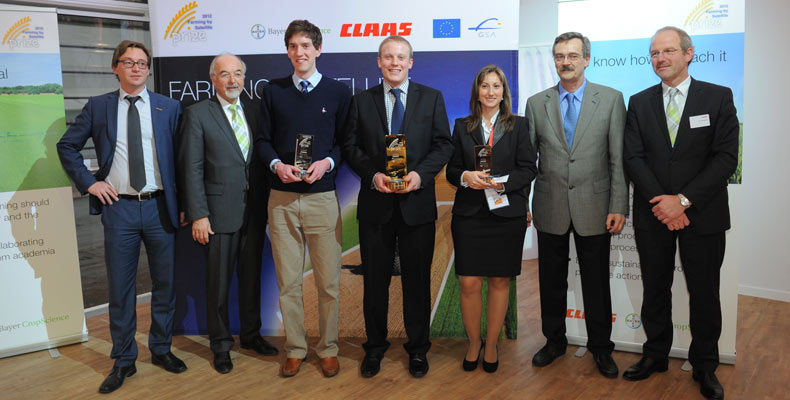 The three winners and their sponsors

Two Harper Adams University students have been awarded first and second place in a precision farming competition sponsored by Bayer CropScience. Rob Fillingham and Jonathan Bradbeer were rewarded for their innovative ideas for the use of satellite technology in agriculture.

The Farming by Satellite competition was an initiative of the European GNSS Agency (GSA), the EU agency responsible for European satellite activities, and was also sponsored by CLAAS, with additional support being given by the NFU in the UK.

First prize winner, Rob, received €10,000 for his winning concept. He developed the idea of a geo-referenced online data platform with information services for farmers across Europe. Titled “European Farm Management Information System” his vision was to enable farmers to use satellite data, weather information and forecasting models in their daily work. 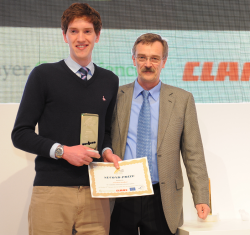 Jonathan Bradbeer was awarded second prize and received €5,000. Jonathan showed how satellite-based positioning can optimise the collection of hay bales from fields. His solution reduces operating time and saves fuel. Third prize was awarded to Verónica Sáiz Rubio from Spain who received €1,000.

Bayer CropScience has long recognised the potential for precision farming to help improve production, efficiency and profit on farm, says Diana Rees, Marketing Communication Manager. “We have already funded a mast on our research farm at Great Chishill, which is part of the network of masts run by RTK Farming Limited across East Anglia, and this initiative is another example of Bayer CropScience supporting growers’ adoption of what potentially is a very useful technology.”

Open to students and young people from across Europe, a total of 114 people entered from 25 different nations.