The photograph, taken by one of our trials technicians near Lincoln on 9th October, shows a very healthy germination of black-grass on this stale seedbed. 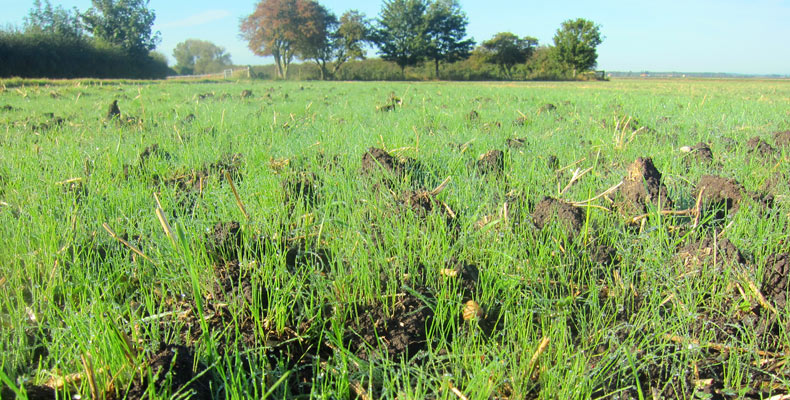 Healthy germination of black-grass on this stale seedbed

The recent wet and mild weather has been ideal for black-grass growth and this is now at the perfect stage to spray off with glyphosate. Reports from our staff throughout  the eastern half of the country are revealing a sudden flush of black-grass over the last week with high populations appearing in both drilled and undrilled fields. Despite predictions that this would be a high dormancy season it seems black-grass is as prolific as ever.

Growers can avoid any further delays to winter wheat drilling by adopting a glyphosate and Liberator (flufenacet and diflufenican) tank-mix at pre-emergence, recommends an agronomist.

Such a mix offers growers the opportunity to control both emerged black-grass seedlings as well as later-emerging plants that could emerge before the wheat crop, says Andrew Wright from Cropwise.

“Black-grass germination has been slow and the continued threat of heavy rainfall is making cultivation and drilling difficult; growers are not waiting for black-grass emergence,” he points out.

“Here in Leicestershire several factors have contributed to low germination rates," he says, "with low soil temperatures and high seed dormancy the predominant cause.  Black-grass that can be seen today is the first flush and we know there is more to come.”

By including glyphosate with a pre-em application, Mr Wright says growers can kill emerged black-grass and still allow residual pre-ems like Liberator to do their job on emerging grass-weeds as they penetrate the soil surface.

“Liberator creates a layer at the soil surface, through which the roots and shoots of germinating black-grass grow.  If growing points are already outside the zone, pre-ems will have reduced effect. So to deal with seedlings at drilling, the addition of glyphosate with Liberator provides immediate and longer-term control,” Mr Wright advises.

In a ‘normal’ year, any plants that had emerged prior to drilling would have been controlled with stale seedbeds, Mr Wright notes.  “I’d be recommending a sequence of Avadex granules (tri-allate) and Liberator where grass weeds dominate, or a tank mix of Liberator and Lexus SX (flupyrsulfuron) where grass weeds and broadleaved weeds are a concern.”

Mr Wright considers flufenacet to be the molecule of choice at pre-emergence – it allows growers to keep pendimethalin for later in the season.

Dr Gordon Anderson-Taylor, herbicides development manager for Bayer CropScience, agrees.  “Flufenacet is the most robust pre-em for black-grass control; as an active substance, it suffers little from resistance.

"Growers considering tank-mixing glyphosate with Liberator must ensure that applications are made immediately after drilling,” he emphasises.  “We always advise Liberator applications within 48 hours of drilling but with a glyphosate tank-mix, that should be the absolute maximum – or you’ll be putting any emerged crop at risk.

“Be sure that your glyphosate formulation is approved for pre-em use, that it is physically compatible with Liberator and follow any guidance on minimum water volume and tank-mixing order.”