The project will not turn project fields into a checkerboard trial site criss-crossed with different treatments. It will remain a commercially run field with one or two large scale strip trials to test the effects of different types of management. These large-scale trials are intended to be the kind other farmers could do on their own farms.

Supporting the farmers during the project are soil and cultivation specialist Philip Wright and NIAB’s John Cussans.In addition, Bayer’s field team will complete black-grass plant and headcounts as well as resistance tests to build up a detailed picture of what is happening in the field each year.

Find out what’s going on at each of our Task Force farmers’ locations below.

Andrew Williamson has low black-grass levels compared to farmers further east but is still wary of the threat it poses. Whenever he crop walks and rogues he spots one or two black-grass plants so he knows he is only one or two seasons of bad management away form a serious problem.

He grows two winter then two spring crops in rotation as part of his control programme and takes a very detailed approach managing individual fields and even areas within fields according to black-grass level. For 20/21 the focus field is growing spring barley.

Andrew Williamson is the host farmer for the Black-grass Task Force in Shropshire. He farms in partnership with neighbouring farmer Tom Giles; they share machinery and specialise in different operations across the farm. In total, there are 430 hectares of combineable crops including winter and spring cereals, oilseed rape and spring beans.

Read on and find out more about this farm and the Black-grass Task Force here. 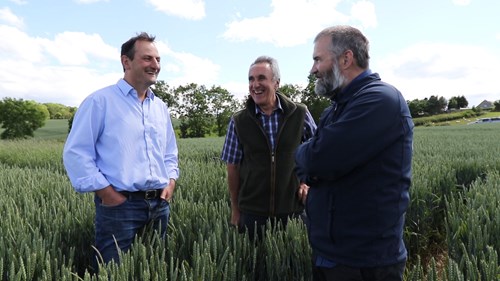 We filmed some great videos with Andrew, and our two independent experts, John Cussans and Philip Wright, covering the following topics:

You can find the rest of the videos from Andrew Williamson's farm and more on the Black-grass Task Force video series here.

Black-grass is relatively under control at HR Bourn and Sons in Lincolnshire. Farm manager Andrew Harker is pleased with the progress he has made but is now focused on planning a profitable rotation despite the weed’s persistent threat. On heavy land which predominates on much of the farm, Andrew doesn’t want to be tied to drilling late in October for black-grass control. The knock-on effects of getting the crop established in wetter, less-optimal weather, and the yield penalty are not conducive to higher returns, but currently it is the best strategy.

Andrew has no fixed establishment technique but tries instead to move as little soil as possible, using Controlled Traffic Farming, and establishing crops after minimum tillage or direct drilling, to suit the field.

His 2020/21 focus field has a small plot herbicide trial looking at a range of grass-weed species, but predominantly black-grass.

The field has high black-grass pressure so a series of spring crops is planned to bring it under control and bring winter cropping back into the rotation. Over the course of the project the aim is to find a sustainable and profitable for this land which has good yield potential. Last season, Mr Waters experimented with cover crops ahead of spring barley and despite not working exactly as planned he will tweak the approach and try aagin this year with another spring barley crop.

7 areas to manage from harvest to drilling to get black-grass control programmes off to the best start.

Black-grass control is the biggest agronomic challenge facing most UK arable farmers. If you have black-grass, taking steps to reduce the population is key, while farmers fortunate enough to be free of black-grass need to keep it that way.

Over the past few seasons a huge amount of added emphasis has been given to using cultural controls as the starting point for black-grass control strategies.